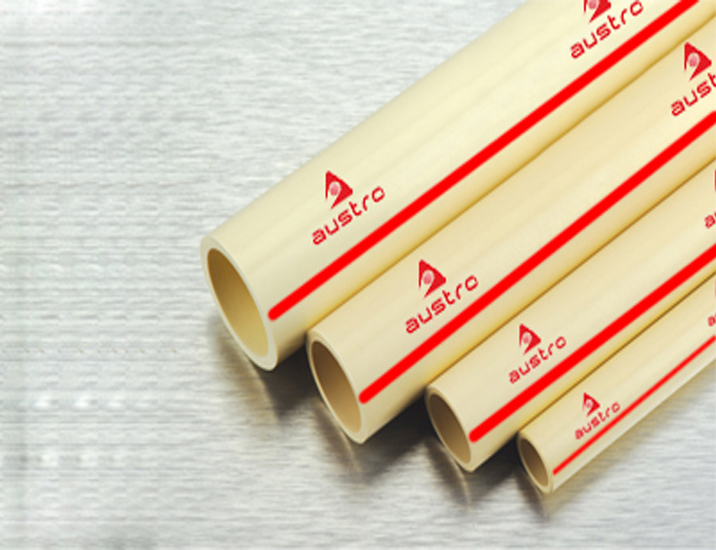 
While considering pipes for both commercial and domestic purposes, PVC pipes have nearly replaced the conventional metal pipes. However, metal pipes are still in use in the industrial sectors where PVC pipes do not serve the purpose in the best way. PVC pipes are the white plastic pipes that are most commonly used for plumbing and drainage. PVC is the acronym for Poly Vinyl Chloride. The reason behind the popularity of PVC pipes is its strength, durability, easy installation and budget friendly features. PVC is a thermoplastic material that is moulded into various shapes in order to create pipes, fittings, valves and other liquid handling supplies. Taking a fact into consideration, PVC and CPVC pipes are often used interchangeably. But there are certain differences between them.

CPVC is the acronym for Chlorinated Polyvinyl Chloride and is the chlorination process that changes the chemical makeup and the properties of the plastic. Some of the common uses of PVC and CPVC pipes include commercial uses such as housing underground wires, farm irrigation systems, plumbing, and drainage and sewage infrastructure; residential uses such as home irrigation systems, residential plumbing, drainage and sewage infrastructure; recreational uses such as makeshift tents and shaded seated areas, frames for greenhouses, carports and raised garden beds.

Properties of PVC and CPVC Pipes

The PVC and CPVC pipes possess some most considered properties while working with them that are discussed below:

Differences between PVC and CPVC Pipes

As already stated, PVC and CPVC pipes are often used interchangeably but there are certain differences that just make them cousin. The main difference or the biggest difference that keeps the interchangeability at bay is not visible at all from the exterior but does exist in the molecular level. As the name suggests, PVC is Poly Vinyl Chloride while CPVC pipes has an extra feature that is being chlorinated. CPVC pipes are altered by a free radical chlorination reaction that effectively increases the chlorine content of the material and are thermoplastic that is moulded into many of the same products as PVC.

Another striking difference between the PVC and CPVC pipes is their peak temperatures. The difference in the makeup of the two varieties of pipes helps them to handle different range of temperatures. This is the reason behind building codes requiring the use of CPVC pipes as opposed to the PVC pipes for uses in hot water applications. The ASTM standard permits PVC pipes to be used in applications not exceeding to 140 degree Fahrenheit. While CPVC pipes on the other hand can handle temperatures up to 200 degree Fahrenheit. Application of temperatures over this can cause softening of the material and weakening of the joints.

Some of the other differences of the PVC and CPVC pipes are:

A most common confusion in this regard is whether to use PVC and CPVC pipes together. As the matter of fact, all the NPS sized pipes and fittings will at the end fit together, but it is not at all recommended to mix and match materials due to the reason that mixing the materials can compromise the pipeline’s temperature and pressure ratings. It is recommended that pressurized pipe system must be constructed using the matching piping material and schedules. Also, consult a chemical compatibility chart in order to be sure the piping materials you chose will work with the unique application.

Since PVC and CPVC pipes have taken over conventional metal pipes and have taken the piping system to a whole new world, the companies are aiming to provide their customers and clients with the latest and the most prevalent inclusion in the piping system. Austro pipes, being a leading manufacturer of the PVC and CPVC pipes is no different. With skilled and persistent labours and high quality budget friendly products, Austro Pipes is one of the best dealers of PVC and CPVC pipes and the most recognized one. Having a client base of over 3000 dealers, Austro Pipes is the most opted for wholesaler in this field and have been consistently satisfying their clients for over a couple of years without a doubt.